Scarred woman takes a journey of hope in 'Violet'

In “Violet,” a musical presented by Foothill Music Theatre, the title character is a young woman who has a terrible scar on her face.

People gasp and recoil when they see her, so she’s scarred inside, too.

Believing that a televangelist in Tulsa can remove her scar, she takes a bus from her home in rural North Carolina in 1964. During the trip, two soldiers who are on their way to Fort Smith in Arkansas befriend her.

Undeterred by their skepticism, she arrives at the preacher’s church only to be rudely rebuffed.

However, because of her friendship with the soldiers, she’s able to face the world and her life with greater self-confidence.

In this production, directed by Milissa Carey, Violet is played by Kaylee Miltersen, who doesn’t seem to have grasped how to undertake the character’s emotional journey. Sure, she’s angry, but her pouty expression doesn’t change much.

(It should be noted that no special makeup is used to show a scar. It’s up to the audience to know she has it, and that is accomplished.)

Her younger self is played alternately by Sheridan Stewart and Sofia Oberg, who fulfilled the role with assurance in the reviewed performance.

The soldiers are Monty (Brad Satterwhite), a pleasant but womanizing white corporal, and Flick (Thomas Times), a Black sergeant who’s still feeling the sting of prejudice against his race. Therefore, Flick has greater empathy for Violet and comes to care for her. Both actors excel in their roles.

Violet’s father is played by Ray D’Ambrosio. He’s dead in the 1964 scenes, but is seen in flashbacks. A well-meaning widower, he does the best he can as a parent, but he’s the one who caused the accident that scarred her when she was 13. During her emotional transformation, she learns to forgive him.

Most others in the likable 16-member cast play multiple roles. Chief among them is James Schott, whose roles include the Bible-thumping preacher who leads the raucous revival service seen by Violet.

Based on a true story, “The Ugliest Pilgrim” by Doris Betts, the lyrics and book for this show are by Brian Crawley.

Jeanine Tesori’s music is a mix of country, rock and religious styles. Two highlights are “Let It Sing,” well sung by Flick, and “I’m on My Way,” sung at the revival.

The simple set by Yusuke Soi, who seats the five-member band upstage. An overhead sign shows the names of towns where the bus stops.

Amanda Ku is the music director, and Debra Lambert is the vocal director. Choreography is by Stacey Reed with costumes by Y. Sharon Peng, lighting by Lily McLeod and sound by Andrew Heller.

For tickets and information, call (650) 949-7360 or visit https://foothill.edu/theatre/productions/violet.html.

Dr. George Papanicolaou, aka Dr. Pap, developed the Pap smear, which can easily detect cervical cancer, thus saving untold numbers of women from this disease, which can be fatal if not treated.

Playwright Jessica Dickey focuses on him in her “Nan and the Lower Body,” being given its world premiere by TheatreWorks Silicon Valley.

Nan is Nan Day, the playwright’s grandmother, a cytologist who briefly worked with Dr. Pap in his lab at Cornell University in upstate New York in 1952.

As the play opens, Dr. Pap (Christopher Daftsios) is lecturing before a closed curtain. Speaking with a heavy Greek accent, he’s difficult to understand.

He also comes across as bombastic and arrogant, characteristics that continue throughout much of the play. Nevertheless in his lecture and at other times he shows respect and reverence for women.

Dr. Pap is married to Mache (Lisa Ramirez), who also speaks with a Greek accent. Her character isn’t as fully developed as the other three are.

Nan’s husband is Ted (Jeffrey Brian Adams), a minister who says he wants women to enjoy equal rights with men. However, he later accepts a new job at another parish without consulting with Nan yet expecting her to move with him.

Although the play’s theme is important and timely, especially since the overturning of Roe v. Wade and limitations on women’s health choices, it’s talky and often slow. That’s due in part to the play itself and to director Giovanna Sardelli.

Sardelli, who’s TheatreWorks’ artistic associate and director of new works, knew the play well because it was part of the company’s New Works Festival in 2019. It was in its developmental stage then, but it still needs some refinement now.

On the other hand, Nina Ball’s scenic design deserves special note. When the curtain opens after Dr. Pap’s lecture, it reveals his lab in great detail.

Later, when the action shifts to a dinner for the Days at Dr. Pap’s home, the lab set splits in half and a comfortably furnished living/dining room moves downstage. The routine is reversed when the action returns to the lab.

Other designers are Cathleen Edwards for costumes, Pamila Z. Gray for lighting and Jane Shaw for sound.

Running about an hour and 35 minutes with no intermission, “Nan and the Lower Body” will continue through Aug. 7 at the Lucie Stern Theater, 1305 Middlefield Road, Palo Alto.

9/11's aftermath inspires 'Come From Away' 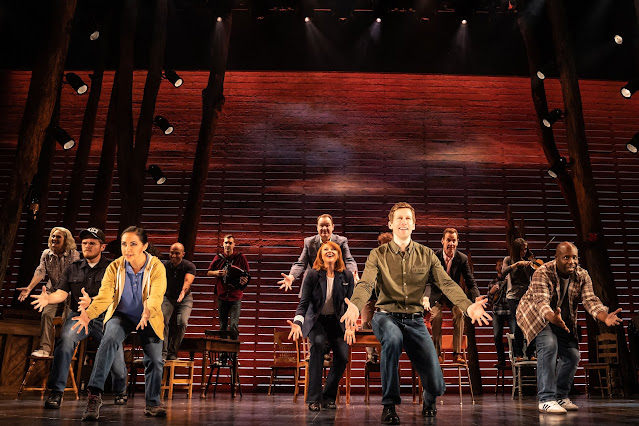 The cast of "Come From Away" breaks out in song. (Photo by Matthew Murphy)

Our world changed forever on Sept. 11, 2001, when terrorists hijacked commercial airliners and crashed into the World Trade Center, the Pentagon and a field in Pennsylvania, killing thousands.

“Come From Away,” a 2015 musical, looks at just one of the repercussions of that day.

U.S. and Canadian airspace was immediately closed, forcing 38 transatlantic passenger planes to land at Gander International Airport in Gander, Newfoundland. Thus Gander’s fewer than 10,000 residents suddenly had to serve the needs of  about 7,000 flyers for up to six days

With a book, music and lyrics by Irene Sankoff and David Hein, the musical focuses on 12 townspeople and 12 passengers – all portrayed by the cast of six women and six men -- who must adapt to the situation.

It opens with the townspeople starting an ordinary day as the news begins to trickle in. Soon they learn that the planes and their passengers are coming.

They immediately muster all available resources and welcome the visitors to their  island community.

Despite their initial wariness and the uncertainty, the hosts and visitors warm to one another. By the time the planes are again allowed to fly, friendships and a romance have blossomed, but another relationship has ended under the strain.

Moreover, the townspeople enjoy improved relationships thanks to their interaction with people of various nationalities, races and religions.

Although the residents refused any payment for their hospitality, the passengers donated thousands of dollars to the community.

The residents and passengers even had a 10-year reunion. As the mayor (Kevin Carolan) put it: “Tonight we honor what was lost, but we also commemorate what we found.”

The result is a heartwarming, uplifting salute to humanity with some added humor and sadness, especially for Hannah (Danielle K. Thomas), whose firefighter son died at the World Trade Center.

Because the show is distilled into some 90 minutes without intermission, much of the information is delivered so quickly that it’s difficult to absorb everything.

However, the essential spirit comes through, leaving the audience cheering and clapping as the seven-member band, including music director/conductor Cameron Moncur, plays a rousing tune after the cast’s final bows.

As a touring production, the show opened July 12 and will run only through July 17 at San Jose’s Center for the Performing Arts, 255 S. Almaden Blvd. For tickets and information, call (408) 792-4111 or visit www.broadwaysanjose.com.