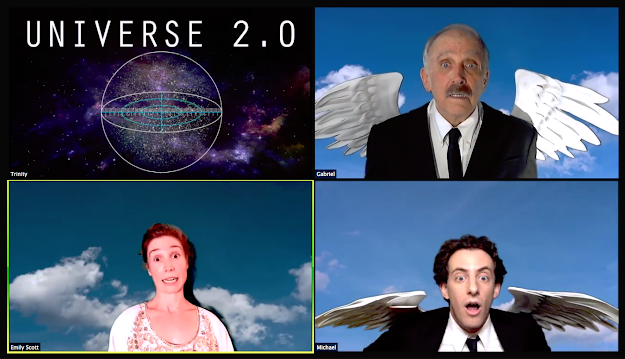 Because of the coronavirus pandemic, Palo Alto Players has turned to Zoom to open its 90th season with David Javerbaum’s “An Act of God.”

Instead of appearing on a stage, the actors speak in front of webcams. Thus they and the audience are deprived of real action.

The story goes something like this: God (Emily Scott) is issuing a new version of the Ten Commandments and trying to explain phenomena ranging from the creation as described in Genesis through Noah and his ark to the good and bad things that have happened over the millennia.

She’s aided by two archangels, Gabriel (Steve Schwartz) and Michael (Brandon Silberstein). Both wear a suit and tie adorned by wings (costumes by Melissa Sanchez). Behind each one is a blue sky with clouds (scenography by Scott Ludwig).

Gabriel, the older of the two, says little except when he intones each new commandment. Michael is more animated and often asks the questions supposedly submitted by viewers. In the meantime, viewer chats appear on the bottom of the screen.

This production is preceded by a warning that some content is adult in nature, most of it sexual.

Although the show produces an ample share of laughs, including from references to current events, it becomes monotonous. Moreover, Scott has a tendency to overact as God, trying to sound authoritative.

Some of the reason lies with the format itself, and some perhaps with director Debi Durst.

Jeff Grafton designed the effective sound, while the lighting design is by Matt Web.

Despite the show’s shortcomings, it’s most welcome to those who so acutely miss live theater.

Streaming tickets are sold on a pay what you choose scale ranging from $15 to $40.