Meet the stage mother from hell in ‘Gypsy’ at Hillbarn 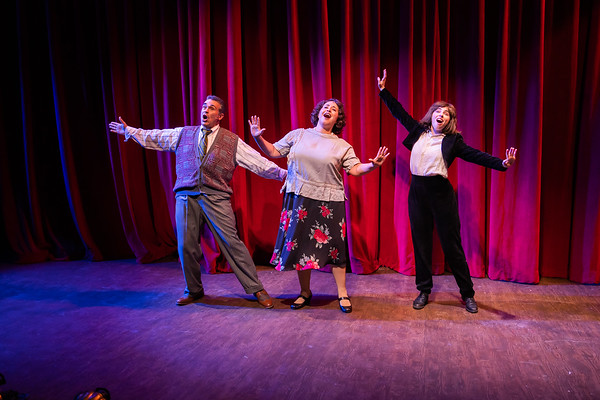 Chris Reber (left) as Herbie, Stephanie Prentice as Rose and Makena Reynolds as Louise sing "Together Wherever We Go." (Mark and Tracy Photography)

In “Gypsy,” the 1959 Broadway musical being staged by Hillbarn Theatre & Conservatory to open its 82nd season, the central character, Momma Rose, is the stage mother from hell, the quintessential helicopter parent.

Full of unfulfilled dreams, she focuses her energies on getting her daughters, June and Louise, into show biz via vaudeville in the 1920s and ’30s. Even though neither girl shows much talent in the skits that Rose devises, she forces them into auditions, forgoing school and other necessities like money.

Confronted with the inevitable departure of the girls and others, Rose is briefly dismayed but soldiers on, as evidenced in her final number, “Rose’s Turn.”

In Hillbarn’s production, Stephanie Prentice as Rose assumes the heavy mantle once borne by such luminaries as Ethel Merman and Bette Midler. She has their ability to belt out a song, but not always their pitch perfection

As directed and choreographed by Lee Ann Payne, this production is largely successful despite some missteps.

The daughters, Melissa Momboisse as June and Makena Reynolds as Louise, seem mostly one-dimensional despite some good acting.

Others in the 24-member cast, including six children, are praiseworthy, as is Chris Reber as Herbie, the girls’ long-suffering agent who falls in love with Rose. He wants to marry her, but she keeps putting him off.

The scene when the girls wind up in a burlesque venue, the strippers – Lisa Appleyard as Tessie Tura, Deborah Rosengaus as Electra and Jill Collister as Mazeppa – needs to be more naughty to match their costumes by Y. Sharon Peng, who also designed the show’s hair and wigs.

Payne’s choreography adds to the show, especially in “All I Need Is the Girl,” the dance scene by Tulsa (Tommy Consunji), witnessed and then joined by Louise.

Musical director Rick Reynolds conducts the 13-member offstage orchestra from the piano. Despite being too loud and sometimes off-key (like some of the singing), the orchestra is adequate.

The memorable music is by Jule Styne with lyrics by Stephen Sondheim. Arthur Laurents wrote the book, which was inspired by the memoirs of Gypsy Rose Lee, the burlesque star that Louise became. Her sister, June, became actress June Havoc.

Some of the best-known songs are “Let Me Entertain You,” “Everything’s Coming Up Roses” and “Small World.”

The set by producer Randy O’Hara, the company’s artistic director, tends toward the drab in keeping with the characters’ environments. However, footlights that border the stage area pose a tripping hazard for the audience. In fact, someone at the opening stepped on one, damaging it.

Because “Gypsy” is such an ambitious undertaking, it might be too big for this smallish venue. Or maybe the unprecedented heat wave that preceded opening night sapped some energy.