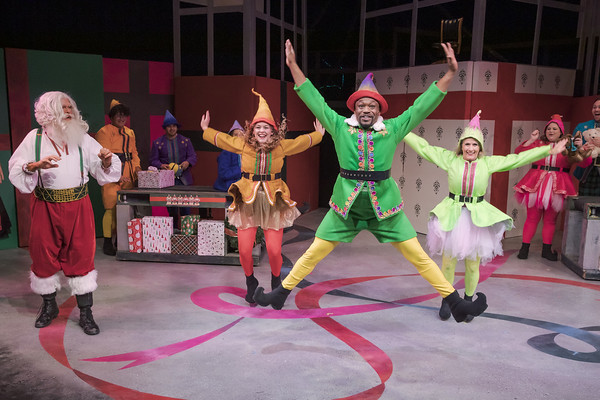 Hard hearts melt in ‘Elf the Musical’ at Hillbarn

Kicking off the holiday season, Hillbarn Theatre & Conservatory is staging “Elf the Musical,” an adaptation of the popular film.

It’s the story of Buddy (Dave J. Abrams) who was an infant in an orphanage when he crawled into Santa’s toy bag. Santa (Russ Bohard) didn’t realize he was there until he returned to the North Pole. He and Mrs. Claus (Lisa Appleyard) decided to raise him as one of their elves.

When Buddy became an adult, he learned that he was human, not an elf. Not only that, his father, Walter (Brandon Savage), lived in New York City and worked in the Empire State Building.

Despite knowing nothing about New York, Buddy found his way there, showed up at Walter’s office and insisted he was Walter’s son. Walter thought he was crazy and had him tossed out.

Over time, though, the hard-hearted Walter not only acknowledged that Buddy was his son but became imbued with the true Christmas spirit.

In the meantime, Buddy had won over Walter’s wife, Emily (Jessica Coker), and his 12-year-old son, Michael (Josh Parecki ). He also had fallen in love with the skeptical Jovie (Allison J. Parker), who worked in a department store.

Hillbarn artistic director Randy O’Hara directs the energetic diverse cast, eliciting fine performances from all the principals except Abrams as Buddy. He’s too loud and childish, eagerly embracing everyone he meets.

On the other hand, he’s a terrific dancer in the many scenes that feature Jeanne Batacan-Harper’s choreography.

Among the standouts in this fine cast are Savage as Walter, Jessica Coker as his wife and Parecki as his son. Also noteworthy are Bohard as Santa and Nadiyah Hollis as Walter’s boss and other characters. Other actors also play multiple roles.

The show features bouncy music by Matthew Sklar with lyrics by Chad Beguelin and a book by Thomas Meehan and Bob Martin.

Joe Murphy serves as musical director. The flexible set is by Matt Owens with lighting by Pamila Gary and over-miked sound by Sheraj Ragoobeer. The colorful, imaginative costumes are by Pam Lampkin.

Running just over two and a half hours with an intermission and suitable for all ages, “Elf” will continue through Dec. 18 at Hillbarn’s venue, 1285 E. Hillsdale Blvd., Foster City. For tickets and information, call (650) 349-6411 or visit www.hillbarntheatre.org.