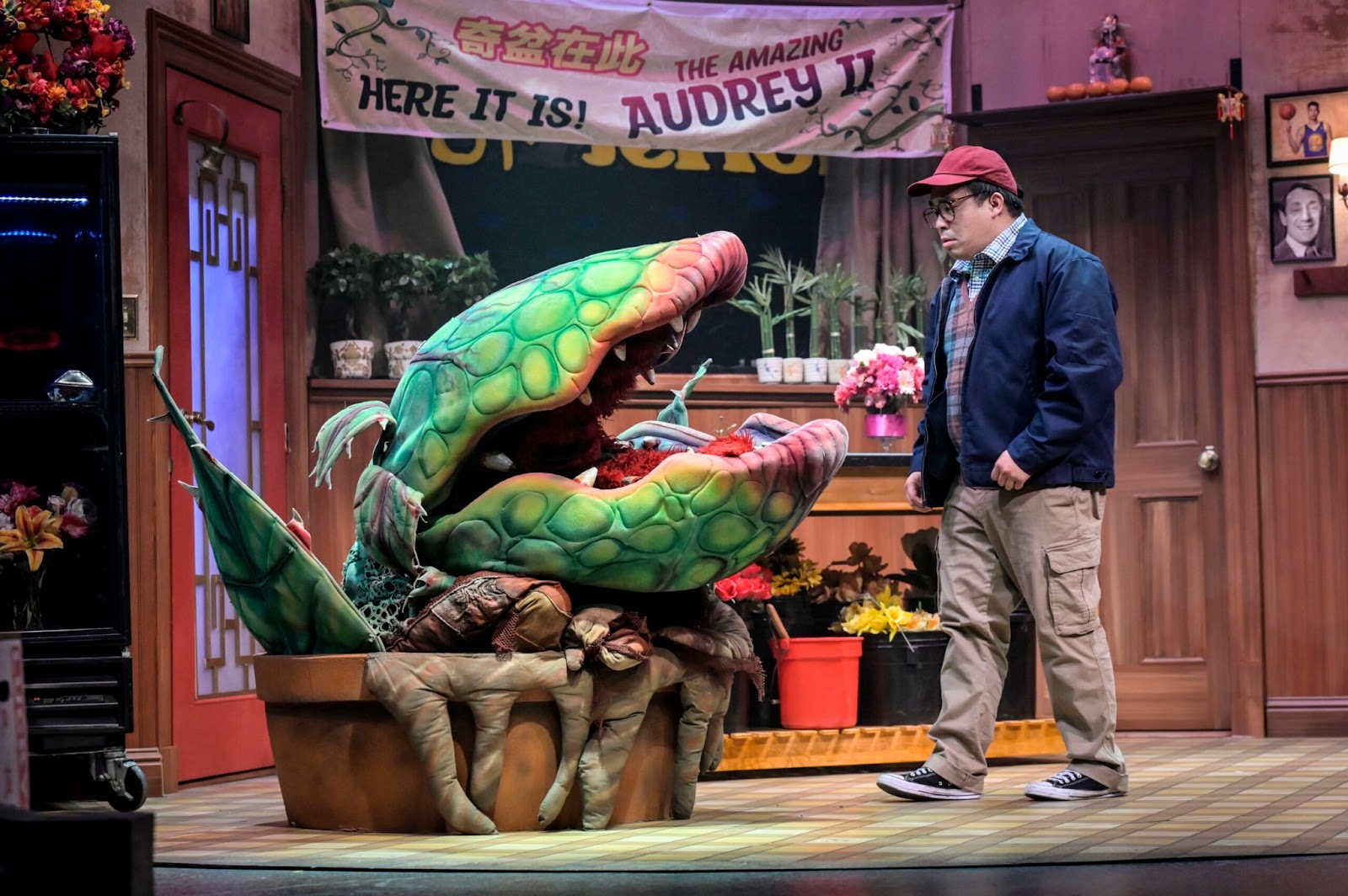 Otherwise Alan Menken’s music and Howard Ashman’s book and lyrics are still entertaining. They tell the story of Seymour (Phil Wong), a nerdy employee of a rundown flower shop and his strange and interesting plant that changes life for everyone.

The other employee in the flower shop owned by Mr. Mushkin (Lawrence-Michael C. Arias) is Audrey (Sumi Yu ), whom Seymour secretly loves so much that he names the plant Audrey II. However, she already has a boyfriend, Orin (Nick Nakashima), a sadistic, abusive dentist who rides a motorcycle and is addicted to nitrous oxide, or laughing gas.

Serving as a kind of Greek chorus is a trio of Black women: Naima Alakham as Crystal, dance captain Alia Hodge as Chiffon and Lucca Troutman as Ronette.

Although the plant leads to improved business and fame for Seymour, it’s decidedly fickle. As it droops, Seymour implores it “Grow for Me.” He then discovers that human blood makes it grow – and grow. Thus, it claims human victims leading up to the tragic ending.

The three Black women provide highlights in songs like the title number, “Da-Doo” and “Dentist!” sung with Orin.

Audrey, who has low self–esteem, sings the plaintive “Somewhere That’s Green” to describe  her ideal suburban home in a place like Levittown, the name given to several low cost, cookie cutter suburbs in places like Pennsylvania, New York and elsewhere. After she and Seymour finally get together, he tells her he wants to take her to a fancy restaurant like Howard Johnson’s.

Brandon Leland plays a derelict before becoming the manipulator of Audrey II. Katrina Lauren McGraw supplies her voice and her demand, “Feed Me (Git It).”

As directed by Lo, the show features noteworthy acting by the entire cast. It also has lively choreography by William Thomas Hodgson to go with sound by Jeff Mockus and lighting by Wen-Ling Liao. Fumiko Bielefeldt designed the character-specific costumes.

Running about two hours, it now continues through Dec. 31 at the Lucie Stern Theatre, 1305 Middlefield Road, Palo Alto. Tickets and information are available by visiting www.theatreworks.org or calling (877) 662-8978.